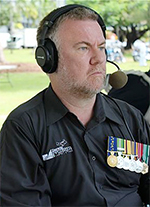 Dr Lewis is a former naval officer, now a consultant military historian as well as a best-selling author. Dr Lewis served for 20 years in the Royal Australian Navy, during which time he saw active service in Baghdad, Iraq, where he led American forces, and in East Timor.

As a museum director he led two museums to new success; the Royal Australian Naval College Historical Collection in Jervis Bay – for which services he received the Order of Australia Medal; and the Darwin Military Museum in the Northern Territory, where he was Director for five years.

Tom is the author of 13 history books, including many detailing northern Australian history in WWII. In May 2016 he added Honour Denied: Teddy Sheean, Tasmanian Hero to the list. In February 2017 The Empire Strikes South: Forgotten Honourable Warriors will be published. This work details all of the Japanese aircrew who died in combat actions across the Top End in WWII – and will revise our understanding of the full nature of that air war.

Tom’s other recent works are Lethality in Combat, (from the Army History Unit through BigSky Publishing) which discusses the reality of battlefield combat, with implications for modern war; and Carrier Attack, an extensive technical analysis of the first Darwin raid, revealing many unknown aspects of that attack, published in October 2013. In 2014 he was awarded the Charles Darwin University Essay Prize in the NT Literary Awards – which saw over 430 entries – for his article: “The Myth of Government Cover-up in the first Darwin Raids.”

Dr Lewis is in popular demand from radio and television stations across Australia for his insightful comments on military history and how it intersects with modern-day life. He has appeared in several documentaries, and is a regular speaker to community groups on military history. After working on The Borella Ride, for which he was the Lead Historian, he is now engaged as Military Historian on The Territory Remembers, the NT Government’s commemoration of 75 years since the first air attack on Darwin.

Dr Tom Lewis was awarded the OAM in 2003. Later decorations include the Australian Active Service Medal; the Iraq Campaign Medal, and in 2007 the United States Army Commendation Medal. He lives in Darwin, and enjoys – when he is not writing – astronomy, collecting antique swords, and tournament chess. Dr Lewis is married with two daughters.

Click here for more information, including lists of books and articles by Tom.

Janice Cooper (Queensland) – Janice Cooper, BA, BEd Stud, MLitt. History, MPHA.
Janice is an experienced family historian with a primary interest in her Australian ancestors following the first arrival in Port Jackson in 1791. With an academic background in Australian history, she researches widely to place families in their communities and historic periods.

She is also interested in having the quality of genealogical and family history research more widely recognised. Many years’ experience teaching research skills to secondary school students has laid a firm foundation for this interest.

Janice is the author of two local history publications – Crossing the divide. A history of Alpha and Jericho districts and Sufficient for living: a history of pastoral industries in the Alpha district. To make the results of her research for these publications more widely available, she is developing a One Place Study: www.alphajericho.com.au to include the names of the hundreds of people who have lived or worked in these Queensland rural districts. She has written articles for several specialised family history and general history journals and newsletters.

She supports family and local history societies in a number of ways – in teaching, management, research, writing and publishing.

Kerry Farmer (New South Wales) Family History Research
Kerry began teaching classes in “Family History Research using the Internet” in Sydney in 1997, and is now the Director Australian Studies, developing the Australian Records certificate for the internationally recognised National Institute for Genealogical Studies. Kerry is the author of DNA for genealogists and Arrivals in Australia from 1788. Together with Rosemary Kopittke Kerry also wrote Which genealogy program?. All published by Unlock the Past.

Kerry has served on the Education Committee of the Society of Australian Genealogists, and presents seminars and classes there as well as at other conferences and forums and undertakes commissioned family history research assignments for others.

Kerry has researched her own family history for over 30 years, researching ancestors predominantly from Australia, New Zealand, England, Scotland, Ireland and Wales. She has also tackled the family branches in Canada, United States, South Africa, India, Germany, Poland, Norway and Russia. Kerry graduated with a Bachelor of Science (Computer Science and Pure Mathematics), and also with a Bachelor of Arts (Literature).

Rob Hamilton (Victoria) – Rob is an inspirational speaker specialising in all things Masonic. Born into a family steeped in Freemasonry dating back to his great grandfather and the Island of St Helena. Rob first joined the order of Antient Free and Accepted Masons of Victoria 48 years ago, and during that time He has occupied every position in what is affectionally known as the “lodge” at a local level, he currently holds the Masonic rank of Past Grand Standard Bearer. An 18th degree Freemason, Knight Templar and numerous other side orders associated with masonry He is a member of several Masonic study circles and The Victorian Lodge of Research, from which he holds a certificate of Masonic studies. He is also a freemason in the English Constitution.

Rob has written numerous papers on various Masonic and related topics including, The Knight Templers, The Schaw Statutes of 1598 (and its influence on the current fundamentals of industrial workplace conditions), Symbolism in freemasonry, and Freemasonry is it a religion. He speaks on Masonic topics such as, The spread of freemasonry through the British empires conquests into America, and the Indian Sub-Continent. The arrival of freemasonry in the colonies of New South Wales and Van Diemen’s Land in the 1780’s. Masonic symbols and monuments found in cemeteries. Interpreting Masonic photographs. What Masonic records can tell us, and where they may be found? Interpreting the Masonic language found in Trove, What were the various constitutions that were operating in early Australia? Rob delivers Masonic knowledge from his 48 years of research into Freemasonry and family history. He has amassed an extensive private library of books and documents, some dating from the mid 1700’s, research papers and modern electronic sources.

These dynamitic subjects help fill in the gaps and put the flesh on the bones between birth and death. What did our ancestors do in the society they lived in and helped to establish The Freemasons were in many cases the first organised groups in any new settlement, in fact 1802 saw the first Masonic meeting in New South Wales held between French naval officers of the Baudin expedition and British officers of the NSW. Corp. This was just 14 years after the British settlement of Port Jackson 1788

Shauna Hicks (Queensland) – Australia and various general topics
Shauna has been tracing her own family history since 1977 and worked in government for over 35 years in libraries and archives in Brisbane, Canberra and Melbourne. Since retiring, she has written a number of family history guides and is a regular speaker at genealogy cruises, conferences and  seminars. She now operates a small part time research and consultancy business Shauna Hicks History Enterprises at www.shaunahicks.com.au and is the author of the blog, Diary of an Australian Genealogist.

Eric Kopittke (Queensland) – Germany and Denmark
Eric has been researching his family history in Australia, Germany, England and Wales since 1985. In the same year he joined the Queensland Family History Society where he has been convenor of the Central European Group for over 20 years. He is also President of the Baptist Historical Society of Queensland.

He regularly speaks at family history societies and at other events. In June 2012 he spoke on German research at the New Zealand Society of Genealogists Conference.

Rosemary Kopittke (Queensland) – online databases and Australian records
Rosemary has been tracing her family history since 1985. A statistician by training, she has worked in that field as an hydrologist, teacher and biometrician.

Her tertiary qualifications include a BSc (Mathematics) and BA (Computer Science) both from the University of Queensland. More recently she has completed the Certificate in Genealogical Studies (English Records) with the National Institute for Genealogical Studies. She currently works as a consultant for Gould Genealogy & History, is regularly invited to speak at events in Australia and New Zealand and has presented on all the Unlock the Past cruises.

She has published numerous indexes to cemeteries and government records though is probably best known for her work with husband Eric on the Emigrants from Hamburg to Australasia 1850-1879 publication. She is editor of Unlock the Past publications and author and contributor to several.

Helen Smith (Queensland) – helenvsmithresearch.blogspot.com.au
Helen has been researching her family since 1986 when her mother lamented the fact she had never known her grandfather, George Howard Busby. Helen found some information and a newspaper photo of him, was hooked and has been addicted ever since with research in Australia, England and Ireland.

She is researching the surname Quested anywhere, anytime and has registered the name with the Guild of One-Name Studies.

She is the author of Death certificates and archaic medical terms and has written for Inside History, Australian Family Tree Connections and other family history journals as well as scientific publications. She is the author of a number of blogs which can be accessed via http://helenvsmithresearch.blogspot.com.au and you can follow her on Twitter @HVSresearch

She has spoken to a wide variety of audiences including Genealogical Society of Queensland Day Conferences, Library Technician Conference, all the Unlock the Past cruises, Unlock the Past Expos and Roadshow and numerous family history society meetings.

Professionally, she is a Molecular Epidemiologist specialising in Public Health Microbiology and has a strong interest in infectious diseases and Public Health through the ages.