Announcing the 14th Unlock the Past cruise (Alaska 2018)

Click here for a PDF version of this media release. 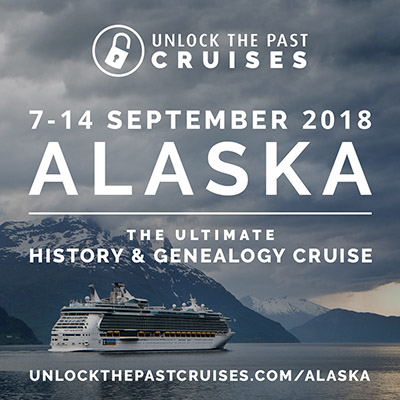 Adelaide, South Australia, 17 May 2017 – Unlock the Past Cruises announces its 2018 cruise – an opportunity to discover more about your family history while in great company and visiting great destinations.

The conference program will feature 40–45 talks in three streams from an international team of 12–15 speakers. No talks will occur when in port or during scenic cruising. An optional full day extra seminar is being considered the day before the cruise to offer additional value to the many who will travel from a distance. This will feature leading north American speakers and a different program.

The featured presenters on the cruise are:

Other speakers are Dr Janet Few and Caroline Gurney from England, Jan Gow from New Zealand, Shauna Hicks, Eric and Rosemary Kopittke, Mike Murray and Helen Smith from Australia and Cyndi Ingle from the United States. More will be announced.

For details, bookings and registration of interest go to www.unlockthepastcruises.com/alaska. US Passport holders have the option of booking with our US travel agent partner, Cruise Planners: O’Connell Travel.

Some comments on previous cruises:

A genealogy conference on the high seas? Not only do you get all the fun of a regular cruise, you have the opportunity to network with other family historians from all over the world. The best part: the lectures and educational presentations are offered by some of the leading speakers in the genealogy industry. And Unlock the Past Cruises has the best selection of destinations and speakers hands down! – Thomas MacEntee, United States, 4th cruise presenter

Only one thing beats a good genealogy conference, and that is a genealogy conference that offers a chance to see a bit of the world, to enjoy some top class entertainment, and above all else, meet many other people sharing a similar interest. It’s also the perfect family holiday, with plenty of fun activities for your partner and kids to get up to on board whilst you’re attending conference sessions! – Chris Paton, Scotland, 2nd, 4th and 8th cruise presenter

About Unlock the Past
Australian based Unlock the Past was established in 2009. It is the event and publishing division of Gould Genealogy & History which has served family and local historians since 1976. It is a collaborative venture involving an international team of expert speakers, writers, organisations and commercial partners to promote history and genealogy through innovative major events and a new publishing brand. It also maintains general and events directories online.