Home »About - Unlock the Past Cruises 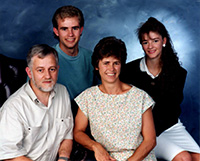 Unlock the Past Cruises launched in June 2013 as a dedicated international history and genealogy cruising brand. This follows the success of several Australian-New Zealand based cruises since 2011 and the high interest in our proposed UK/European cruises from prospective cruisers, presenters and promotional partners.

Our family and local history business interests began as a hobby business by Alan and Anthea Phillips from their Adelaide Hills home in September 1976. Alan left his former employment in February 1982 to develop the business full time in parallel with the remarkable expansion of interest in family and local history in the 1980s. During the 1980s Alan & Anthea’s son, Stephen, and daughter, Alona, joined the business and are still with us today, along with a small team of others. A number of sister brands have been established since then.

Gould Genealogy & History
A supplier of products for family and local historians since 1976. With over 9000 products it still has one of the widest ranges of worldwide genealogy products anywhere.

Archive Digital Book Australasia
Established in 2003. Has digitised approximately 2 million pages of old and rare books with approximately 130 million names. We are a significant supplier of Australian and New Zealand content to findmypast, World Vital Records, MyHeritage and Ancestry. And now many of the books scanned are being offered though genealogy ebooks as digital downloads.

Unlock the Past
Commenced in 2009 as a collaborative venture involving a team of expert speakers, writers, organisations and commercial partners to promote history and genealogy through:

Genealogy-ebooks
The ebooks division of Gould Genealogy & History – established June 2013. Initially this will offer all Unlock the Past print publications in parallel ebook editions; also many Archive Digital  Books Australasia data CDs as digital downloads – in time over 1000 titles. Ebooks from other publishers will also be added soon to make this a one stop source of genealogy related ebooks.

Unlock the Past cruises

An international history & genealogy this is our most recent venture, but it is founded on the back of experience with a number of successful genealogy cruise-conferences at sea since 2011.