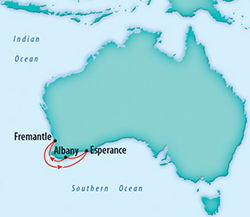 A short break holiday with a bonus history and genealogy conference is ideal in the January warm weather and is a great way to relax so why not join us and cruise the WA coast to Esperance and Albany.

The extraordinary coastline of the continent takes on a different perspective when viewed from the ocean. Astor will first call at Esperance, renowned for its scenic beauty. The breathtaking beauty of Albany’s rugged coastline will create a fitting backdrop from the viewing deck as we sail into Albany. Albany is where the first European settlers set foot in Western Australia, and much of their legacy remains today with around 50 colonial buildings standing proudly as museums, galleries and restaurants. From convict prisons, whaling ships and taverns to quaint cottages and grand National Trust residences, you can take in almost two centuries of history.

Albany was the gathering point for the first convoys carrying the Australian Imperial Force (AIF) and New Zealand Expeditionary Force (later to be known collectively as the ANZACs), that departed from Albany in November and December 1914.  This cruise program is expected to have some tie in with this occasion—as part of a wider general interest program.

Click here to have your say about future cruises